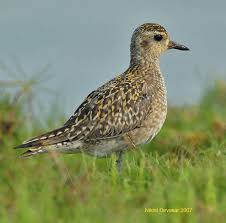 he uplands are home to a range of Artic Alpines – examples include alpine club-moss, silvery moss and dwarf willow. Arctic-alpines are adapted to a short cool summer. Many lie prostrate or hug the ground to avoid damage and many need several growing seasons before they can flower or bear fruit.

The hilltops support a meagre and specialised wildlife. Look for the hare, which may jump from under your feet. This hardy mammal can survive on a diet of mountain grasses and sedges, though it also occurs on lower ground. It is a race of arctic mountain hare, but unlike the race found in Scotland, its coat seldom turns white in winter.

No bird captures the character of the hilltops more evocatively than the golden plover. Its sweet, melancholy call as it watches from a stone or peat hummock follows the hill walker. As a breeding bird, this beautiful plover is now quite rare in Ireland, where it is confined to the north and west.

One of the main predators on the hilltops is the peregrine falcon, which ranges widely in search of food, particularly wood pigeons. Peregrines nest on the cliffs choosing their nesting ledges with an eye to their inaccessibility and favouring south-facing cliffs for warmth and light. Every suitable cliff is occupied annually by a pair, though it is difficult to pinpoint their eyries on the cliff faces.

Ravens, which also nest on the cliffs, are the scavengers of the mountains. They nest as early as February, a time of year when hard weather and scarcity of grazing claims the lives of many deer and carrion is at its most plentiful. The raven’s loud croaking call is unmistakable and a visit to Glenveagh should be rewarded with a sighting.

The Park is now open.

The shuttle bus is not in operation.

The Castle is closed.

The Tearoom is open for take away 10am -5pm